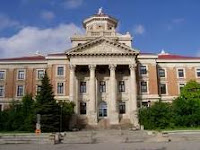 (3) have achieved a minimum cumulative grade point average of 3.5 over the equivalent of the last two years of study;

(4) show great promise as researchers and as graduate students; and

(5) are not recipients of external funding that pays for their tuition.

This scholarship may be held with the UMGF and other awards offered by the University of Manitoba, but may not be held in conjuction with the International Graduate Student Entrance Scholarship (IGSES) and the International Graduate Student Bursary (IGSB). Students may be considered for this scholarship in each year of eligible study. Students who are enrolled in a re-registration year are not eligible.

Scholarships will only be applied against any outstanding international tuition fee differential.

This scholarship will be administered by the Faculty of Graduate Studies.

(4) Application should be submitted to Faculty of Graduate Studies, 500 University Centre