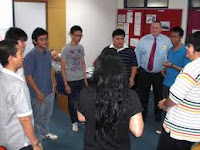 Melbourne Institute of Business and Technology Indonesia (MIBT Indonesia) is committed to helping students achieve goals by offering scholarships to outstanding students. MIBT Indonesia would like to reward you for the excellent academic results you have achieved at school by offering you to the opportunity to secure a scholarship for your studies.

To be considered for an MIBT Indonesia Scholarship you must:

Final Decisions will be based on UAN results and the essay